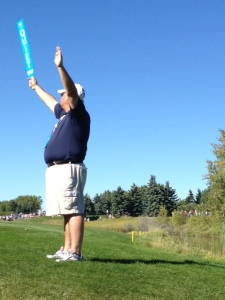 It was great seeing our mayor on Sunday at the Shaw Charity Classic when he presented the winner, Rocco Mediate with a white hat. It was quite the presentation with Rocco looking nervous as though he had to do the hoky-poky in front of a cheering crowd. Before giving it to him, we all had to shout a loud “Yahoo!”.

The tournament went really well and I think it gave the Champions Tour’s players a chance to see Calgary and to take in some western hospitality. Most of them were very gracious and they spoke highly of our downtown and the people that make up our fine city.

I had a chance to take a few pictures on Wednesday at the Pro-Am and to get autographs. I walked with Mark O’Meara and Jay Haas for a number of holes then switched over to Esteban Toledo and our own Canadian, Dave Barr. I enjoyed chatting with Fred Funk and told him I enjoyed his commercial with the “skinny jeans”.

All of us were treated to a free Greek yogurt from Liberte. And kids were given stuffed space creatures from Shaw. There were plenty of Big Rock beer on ice and lots of action around Fred Couples who was the crowd’s favourite for the week.

One question I have, who designed the trophy?