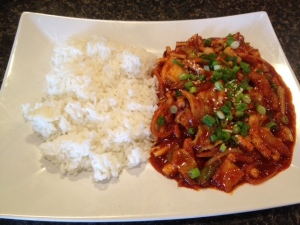 I haven’t seen Huong for a long, long time. He used to visit our table on a frequent basis when we dined at the ‘Pho Huong Viet’ restaurant on Bow Trail but when he moved to 17th Avenue, we no longer ran into him. I think his family is running it for him so if you see him, tell him I said ‘Hi’.

His brother used to run the second location, next to the 7-11 on 37th Street between 16th and 17th Ave where I would see him in the kitchen sometimes.

But there was a time last year when they ran out of the soup stock. That went on for a number of weeks and I couldn’t really understand that. They were serving everything else but the bread and butter which for a Vietnamese restaurant, was the PHO.

Now in 2014, it is under new management. The first thing you will notice when you walk in, is the new expanded menu. The same noodle dishes and subs are available on the right side of the menu but now, there are Korean dishes. We ordered two dishes, Spicy Squid on Rice (pictured) and Sate Beef Noodle in Soup. The Spicy Squid was delicious and very Korean. However, I was disappointed with the Sate Beef Noodle in Soup. I found it to be more Korean than Vietnamese because it lacked the cardamon/ cinammon flavoured beef soup that usually comes with Pho. Also, the pho was replaced with very thin vermicelli instead of the flat thin noodles that I have grown accustom to liking.